Are speed bumps hurting the environment?

In the past two decades, speed bumps have relentlessly spread all around the world.  The correlation between lower speed and reduced accidents is well established now so the appeal of speed bumps to road planners is obvious.

And, as the majority of traffic accidents happen in towns and suburb that’s where speed bumps have most blossomed.

No one would claim speed bumps are perfect though and they get their fair share of criticism – mainly for causing noise and diverting problems to other streets.

They attempt to force drivers to drive better, as opposed to coaching or encouraging drivers to do so.

Call out the most important elements of the visual. Include “Tweet this!” links that mention key points and vital takeaways from your visual. 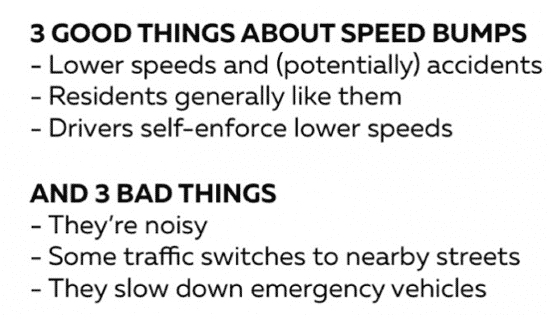 Anything to do with improving driver behaviour gets us interested at GOFAR of course, and so we ran a series of tests on speed bumps and noticed another impact that’s not been widely noted before, surprisingly.

Speed bumps cause more fuel to be burned.  Much more!

A typical driving style over speed bumps is to slow down for the bump, and then accelerate back up to the speed limit after.  Some drivers can even be observed going a little over the limit, to “catch up”.  Not that safe!

In general, the most efficient driving style is a smooth one, driving, in an alert fashion, at a consistent speed at or just below the speed limit.  With this style we use just enough fuel and no more and we stay alert to potential dangers. 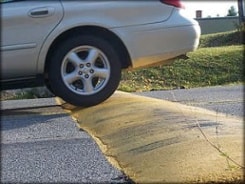 We try to be ready to brake when needed but minimise the need to do so by watching ahead for hazards and keeping a safe distance so we can react.

On speed bumps, drivers are “forced” to be safe which achieves one  goal but hurts the efficiency and environment goal – because when

we brake our forward momentum turns into heat, and then to regain our previous speed we need to use more gas.

A series of speed bumps therefore causes a stop start style that is very inefficient and creates extra emissions because fuel is burned that did not need to be burned when the road was flat.

How bad is it?  We were surprised.

Here’s what happened to fuel burn and emissions.

When you add up the trips with and without speed bumps then you can see that fuel use goes up 60.5% in this GOFAR test. 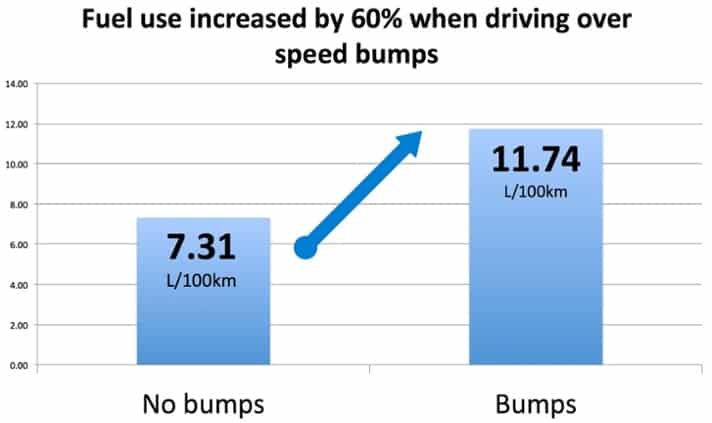 UK motoring organisation, the AA, found similar results in their track tests with the addition of speed bumps increasing fuel consumption by 46.9%.

For those who like imperial measures they showed that speed bumps almost halved mpg from 58mpg to 31 mpg in an average car.

So what’s the alternative?  How about flat speed bumps and responsible drivers!

No one wants drivers speeding through neighbourhoods.  But we all need to be greener too and lower speed and speed bumps increase emissions.  It’s tough for council road planners as they need to know how do we marry safety and the environment?

Well – at GOFAR we have our views on driver safety and improving driver behaviour, and so we were interested to see a way forward recently being tested in London.

The solution being tested is speed bumps that are actually a trick of the eye as they’re really flat, but they are painted to look like normal speed bumps.

We’re very interested to see how they work out.  They’ll allow well-trained emergency vehicle drivers to get where they need unhindered, and they’ll solve the noise problem of speed bumps and the wasted fuel burn that they currently cause.

Of course, it depends on the driver reaction too.

We find that drivers use GOFAR’s real time feedback as a conscience and a reminder to prompt them to a happier, cheaper, greener driving style.

We think once local drivers realise these speed bumps are not real they may still act in a similar way – but rather than forcing drivers to drive better, they will encourage drivers to do so with clear environmental benefits.

Whilst our tests were consistent with those of the AA, we only did 8 test drives and it’s probable that driving over different speed bumps in different conditions will have different results.

If you want to replicate our test here’s what you need to do:

We want GOFAR to become the world’s biggest driving experiment so if you have something you’d like us to test, then just email hello@gofar.co with a suggestion and we’ll get on it!

Save almost 10% on each tank of fuel

GOFAR provides realtime feedback to help you drive more efficiently and save money on fuel.

You have 0 item in cart.

Need an extension cable? Want to go green? Choose from these handy products: